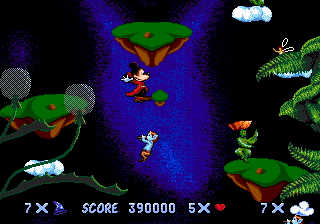 Watch Download (.gmv)
Author notes Discuss
6.63 / 10 Votes: 3
Fantasia is the title of a side-scrolling video game developed by Infogrames and produced by Sega for its own Mega Drive/Genesis system. The game was loosely based on the film of the same name.
In the game, the player controls Mickey Mouse as the Sorcerer's Apprentice through various side-scrolling levels in an attempt to collect musical notes that somehow went missing whilst he was asleep. The game's four levels were based on amalgamations of the segments of Fantasia, each one around the elements: water (The Sorcerer's Apprentice, Dance of the Reed Flutes and Arabian Dance), earth (The Rite of Spring), air (Russian Dance, Pastoral Symphony and Dance of the Hours) and fire (Night on Bald Mountain, Toccata and Fugue in D Minor). The player defeats various enemies by jumping on them or by collecting magical bubbles that could be used to shoot at enemies as projectiles. In each level, the player collects a certain number of hidden magical notes in order for the song to play once again.
In this run, maTO makes his way through the game as fast as possible.
Published on 3/24/2017 12:00 AM
See full publication history
Game:
Fantasia
Genres:
Platformer