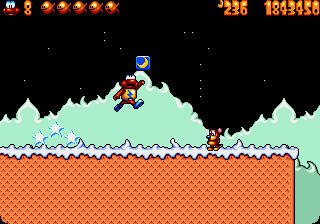 Watch Download (.bk2)
Author notes Discuss
7.18 / 10 Votes: 4
James Pond 3: Operation Starfish (1993) is a platform game starring a super agile fish named James Pond, which has been Amiga's somewhat preemptive answer to Sonic the Hedgehog and Super Mario World games. The physics of this game allow for many interesting acrobatics, like running up the walls and ceilings at breakneck speed. As such, these abilities are abused to the point where, in some parts, Pond bounces around as fast as Sonic does.
Following the game's plot, the evil Dr. Maybe attempts to take over the dairy industry, for which he constructs a giant stronghold on the Moon. Because, as you probably know, its surface is made of cheese. The overworld map spans over 100 levels, but most of them are optional.
This run is the author's third submission of this game. The Cheese Mines and Stiltonium Machines were destroyed in order to reach the good ending. According to the author, the bad ending is about as bad as losing the game, as you get a non-standard game over instead of the ending.
He improves the previous run by 4:42.29, thanks to new glitch discoveries and better optimisation in many places. Please read the author's comments for more details.
Published on 4/23/2017
Obsoletes:
Genesis James Pond 3: Operation Starfish "best ending" by Flip in 33:50.62

Emulator Version:
BizHawk-1.11.9.1
Webmasters, please don't link directly to the files. Link to this page or the front page instead.
Republication of movies from this site is only allowed under the following conditions:
Do not label them with speculations. If unsure, ask the site staff for details.