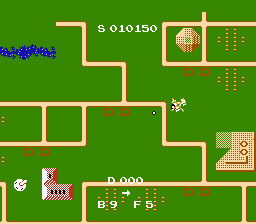 Watch Download (.bk2)
Author notes Discuss
4.98 / 10 Votes: 5
Raid on Bungeling Bay has the player controlling a helicopter which is on a mission to destroy everything that moves. The only ally is the carrier, which is where the player begins and may return to for repair and pick up bombs, as long as the player manages to protect it from being destroyed. This game is also notable for being the first game developed by Will Wright, who went on to develop the immensely popular SimCity series.
link_7777 completes the game in record time.
Published on 5/14/2017
See full publication history
Game:
Raid on Bungeling Bay
Genres:
Action

Emulator Version:
Bizhawk 1.12.1
Webmasters, please don't link directly to the files. Link to this page or the front page instead.
Republication of movies from this site is only allowed under the following conditions:
Do not label them with speculations. If unsure, ask the site staff for details.