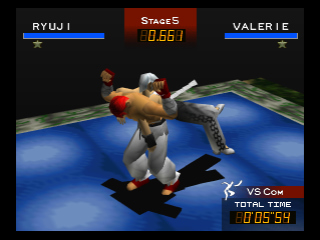 Watch Download (.bk2)
Author notes Discuss
3.71 / 10 Votes: 4.5
Take a collection of fist-fighters, wrestlers and martial arts experts, and combine them into one tournament. But instead of simply depleting the health bar, you must win points depending on how you defeat an opponent; for example, ring-outs are 1 point, special moves 4 points and counters for special moves 2 points.
This run employs various ways to win encounters in a single round by gaining more points than the enemy. As speed is the goal, the opponent is usually taken down before getting the chance to score points. Ryuji is used because of his extremely fast counter-throw.
This is an improvement of 0.89 seconds over the previous movie, thanks to better luck manipulation.
Published on 6/22/2017
Obsoletes:
N64 Fighters Destiny by Spikestuff in 01:43.07

Emulator Version:
BizHawk 1.13.0
Webmasters, please don't link directly to the files. Link to this page or the front page instead.
Republication of movies from this site is only allowed under the following conditions:
Do not label them with speculations. If unsure, ask the site staff for details.