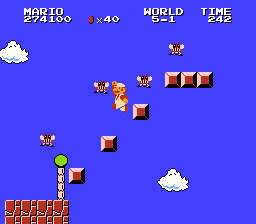 Watch
Super Mario Bros. Special: 35th Anniversary Edition is a ROM hack that effectively ports over Super Mario Bros. Special to the Super Mario Bros. engine on the NES. Every level has been recreated and various items and enemies such as the Hammer and Sidesteppers were added. The only things not recreated are the noticeably different jumping physics and the screen-by-screen scrolling that were present in the original game.
SeraphimIII, gaster319 and slither collaborate to complete the game in record time, utilizing various glitches in the process. Unlike most 2D Mario games, Super Mario Bros. Special didn't have any warps, and this was faithfully kept in this romhack. This means that every level has to be completed.
The baseline tab shows the default movie beating the game as fast as possible without any special conditions.