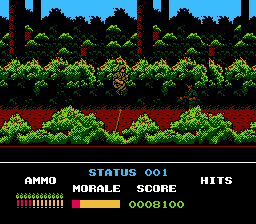 Watch Download (.fm2)
Author notes Discuss
5.27 / 10 Votes: 6
The film Platoon featured a squad of five soldiers on their mission for the US Army in Vietnam. In this action game based around the film, you take control of these five guys in turn, with the chance to switch between them as they each take one of the 3 hits that would kill them.
In this run, the author easily navigates the game's maze-like maps in under 8 minutes, obsoleting the previous run by 00:49.15 seconds thanks to a faster route and better movement techniques.
Published on 9/8/2017 12:00 AM
Obsoletes:
NES Platoon by chupapi in 08:26.28