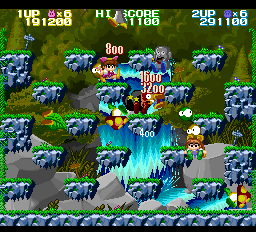 Chip-chan Kick! is a platformer game developed by Cybertech Custom and released in 1996 for the PC-FX, NEC's Japan-exclusive successor to the PC Engine, unsuccessful competitor to the Sony PlayStation and Sega Saturn, and NEC's last home video game console. It is an elimination platformer in the style of games such as Snow Bros., Bubble Bobble and Parasol Stars. The player characters, Chip and Chap, are stuck on a screen filled with enemies; by defeating them all, and collecting their powerups and bonus objects, they progress to the next screen with more enemies, and rinse and repeat.
Noxxa uses both Chip and Chap to defeat Warbit in record time.
The official encodes include the player entry at the end.
This is the first ever PC-FX publication on this site.
Published on 9/11/2017
See full publication history
Game:
Chip-chan Kick!
Genres:
Action
Platform

Emulator Version:
BizHawk 2.1.0
Webmasters, please don't link directly to the files. Link to this page or the front page instead.
Republication of movies from this site is only allowed under the following conditions:
Do not label them with speculations. If unsure, ask the site staff for details.