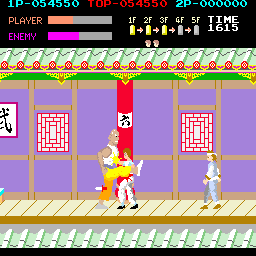 Watch Download (.mar)
Author notes Discuss
6.91 / 10 Votes: 8
Kung-Fu Master is an arcade game produced and released by Irem in 1984. It is perhaps more widely known by its NES title, Kung Fu. Kung-Fu Master is the seminal game of the "beat 'em up" genre, and it would influence the arcade game industry for years to come. It was a great success for Irem, not just for the arcade market, but also later for the home video game market, as it (as well as Irem's 10-Yard Fight) was chosen as one of the launch titles for the NES. Kung-Fu Master is based on Bruce Lee's final film, Game of Death, wherein the hero must ascend a pagoda at his increasing peril, with each floor guarded by a master of a different martial art.
£e Nécroyeur clears the five floors in record time.
Published on 10/14/2017
See full publication history
Game:
Kung-Fu Master
Genres:
Action

Emulator Version:
MAME-RR v0.139 v0.1-beta
Webmasters, please don't link directly to the files. Link to this page or the front page instead.
Republication of movies from this site is only allowed under the following conditions:
Do not label them with speculations. If unsure, ask the site staff for details.