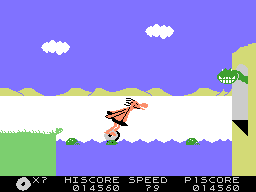 Watch Download (.bk2)
Author notes Discuss
5.62 / 10 Votes: 5.5
B.C.'s Quest for Tires is a 1983 video game developed by Sydney Development and published by Sierra On-Line. It was released for not just the ColecoVision, but also the Commodore 64, Atari 8-bit family, ZX Spectrum, MSX, and Apple II. The game is based on the comic strip B.C. by Johnny Hart, with the title being a play on the title of the contemporaneous film Quest for Fire.
In the game, the player takes the role of the caveman Thor, who has to rescue his girlfriend, "Cute Chick", who has been kidnapped by a dinosaur. To do this, he must travel on his stone unicycle (actually an impossible wheel) through several levels. Each level has Thor moving from the left to the right, avoiding various dangers.
The game is considered ridiculously difficult, but MESHUGGAH beats one loop of the game in just 1 minute and 42 seconds, making it look easy.
Published on 12/5/2017
See full publication history
Game:
B.C.'s Quest for Tires
Genres:
Action