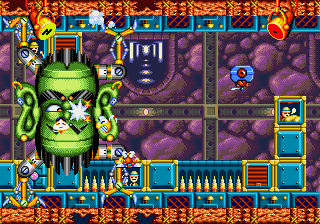 Watch Download (.bk2)
Author notes Discuss
7.82 / 10 Votes: 4
Dynamite Headdy (1994) is an often-overlooked action/platformer gem whose main hero, a star puppet named Headdy, can attack his enemies by shooting his detachable head at them.
During the span of the game, Headdy must defeat the evil puppet king Dark Demon who captured his friends' home town, the Keymasters that guard the path to the villain, and Headdy's lifelong rival Trouble Bruin, who is eager to take his place in the production.
To prevent all those bad things from happening, Headdy has a nice arsenal of interchangeable heads that are used both to attack enemies and to aid traveling, which brings enough variety to entertain the viewer throughout the movie.
This run is an improvement of 00:45.81 seconds over the predecessor publication. It is achieved through a variety of improved movement, new glitches/tricks, and better RNG manipulation. Some key time saves include better Hangman/Spike Head flings, a couple small sequence breaks, and a boss phase skip.
Published on 12/31/2017
Obsoletes:
Genesis Dynamite Headdy by emu in 33:22.82

Emulator Version:
BizHawk 2.2
Webmasters, please don't link directly to the files. Link to this page or the front page instead.
Republication of movies from this site is only allowed under the following conditions:
Do not label them with speculations. If unsure, ask the site staff for details.