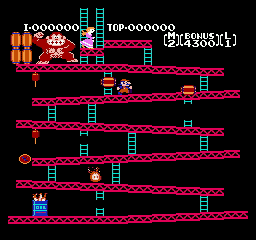 Watch Download (.fcm)
Author notes Discuss
6.78 / 10 Votes: 38
Donkey Kong is a classic game that has been challenged plenty of times at this site, by many players.
The author of this movie manipulates luck so that Mister Jumpman (who later became Mario) never needs to jump over, wait for, or otherwise evade deadly objects.
Note: Previously, every attempt at this game had been rejected ― either because the movies had been imperfect or just because the game is too simple.
(Isn't it? Even the video codec thinks that it can encode the movie without loss at a mere 251 kbit/s rate.)
But persistence prevailed (take no hint!); the competition between players entailed a movie's publishing. Soon thereafter, it was improved 4 more times. Here's the latest version, made by Phil.
The following other authors should be acknowledged for their contributions:
Published on 6/9/2005 12:00 AM
Obsoletes:
NES Donkey Kong by Arc in 01:18.17