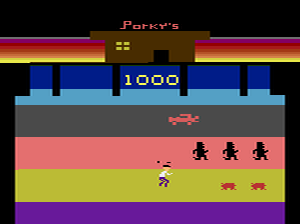 Watch Download (.bk2)
Author notes Discuss
3.03 / 10 Votes: 12
Porky's is a video game released for the Atari 2600 in 1983. The game is based on the 1981 film of the same name and published by 20th Century Fox.
The player plays as Edward "Pee Wee" Morris, who, despite his shortcomings, strives to get revenge on Porky, the owner of the bar that dissed Pee Wee and his friends. Spikestuff and Alyosha get Pee Wee to the detonator to blow up the bar in just under 8 seconds.
Published on 12/31/2017 12:00 AM
See full publication history
Game:
Porky's
Genres:
Action