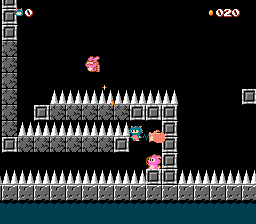 Watch Download (.bk2)
Author notes Discuss
8.1 / 10 Votes: 5
This is Super Bat Puncher. You take control of Captain Roast of the Bat Excommunication and Eradication Force (or BEEF), who travels to Planet BAT to punch some bats. You get a boxing glove for that which can also be used to boost yourself off of walls, inviting various speed tricks. You also get a little bird companion called Sir Loin who can be controlled by the second player. He's used occasionally in order to manipulate bats or kill out of the way enemies. Further details are outlined in the author's comments.
Super Bat Puncher is a homebrew game for the NES by Morphcat, with music composed by Dave Harris. This TAS aims to complete two loops of the demo version of the game, using a bonus item that can only be obtained after the game has been completed once.
You can watch the complete run being played back on a console.
Published on 6/8/2018
See full publication history
Game:
Super Bat Puncher
Genres:
Platform
Unofficial game

Emulator Version:
BizHawk 2.1.0
Webmasters, please don't link directly to the files. Link to this page or the front page instead.
Republication of movies from this site is only allowed under the following conditions:
Do not label them with speculations. If unsure, ask the site staff for details.