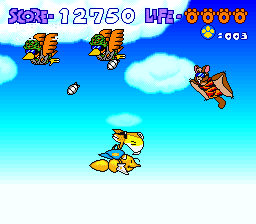 Watch Download (.bk2)
Author notes Discuss
4.99 / 10 Votes: 4
Chester Cheetah: Too Cool to Fool is a 1992 video game that starred Cheetos mascot Chester Cheetah, and was only released in North America.
The game is composed of simple side-scrolling platform levels. On each level there is a hidden "scooter" part. Chester can dash and stun various enemies by jumping on their heads.
Author dekutony beats the game in record time.
We also have a run of the game's sequel.
Published on 6/10/2018
See full publication history
Game:
Chester Cheetah: Too Cool to Fool
Genres:
Platform