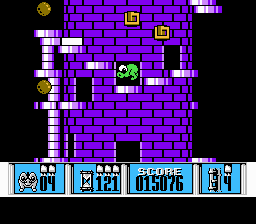 Watch on YouTube
Author notes Discuss
4.25 / 10
Published on 6/16/2018
Castelian is a puzzle platformer in which the basic goal is to ascend towers from the base to the apex. Your frog-like character is tasked with demolishing these towers by planting a bomb at each tower's top (wouldn't bombs around the bottom be easier?) after finding the right route up the tower.
The game was also released on other systems as Nebulus, Kyorochan Land, Subline, and Tower Toppler.
Powerhouse NES runner DrD2k9 runs, jumps, and shoots his way up all the towers, while improving his previous movie by 00:01.91 seconds.
Obsoletes:
NES Castelian by DrD2k9 in 14:51.63

Emulator Replay:
FCEUX 2.2.3
Download (.fm3)
Webmasters, please don't link directly to the files. Link to this page or the front page instead.
Republication of movies from this site is only allowed under the following conditions:
Do not label them with speculations. If unsure, ask the site staff for details.