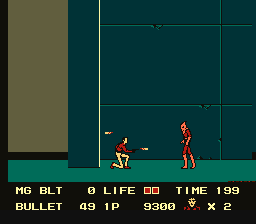 Watch Download (.fcm)
Author notes Discuss
4.75 / 10 Votes: 17
Some longlegged secret agent has to rescue his female partner who was kidnapped by Ku Klux Klan-wannabe terrorists led by some space alien wizard. Between the levels, the terrorists dance in front of a giant widescreen TV showing pictures of the woman in risqué positions and of their alien leader. (We wish we were making this up, but NES games can be pretty weird sometimes.)
This movie uses a password to get the hardest difficulty, thus not having to finish the game twice.
Published on 7/6/2005
See full publication history
Game:
Rolling Thunder
Genres:
Platform
Unofficial game