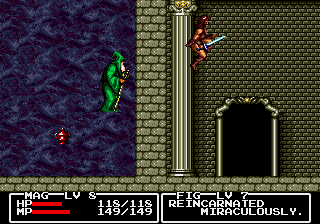 Watch Download (.bk2)
Author notes Discuss
7.69 / 10 Votes: 7
Cadash is a sword and sorcery video game which combines elements of both the role-playing video game genre and the platform genre. The game was originally released for Arcade machines by Taito in 1989, later ported to home video game consoles such as the TurboGrafx-16 in 1991, and the Sega Mega Drive/Genesis in 1992.
It isn't the most straightforward of platformers, seeing how you can actually gain levels and buy items in this one. There are also mandatory items to fetch and quests to complete in order to advance.
In this run, Challenger beats the predecessor movie from nifboy by 06:22.28 minutes. The improvement is so huge thanks to using 2 players, new tricks and glitches, better boss fights, and greater movement precision.
Published on 7/25/2018 12:00 AM
Obsoletes:
Genesis Cadash "1 player" by nifboy in 21:55.23