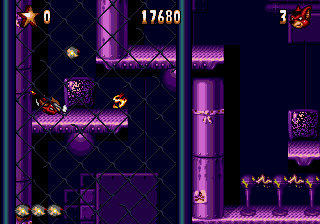 Watch Download (.bk2)
Author notes Discuss
7.92 / 10 Votes: 5
Aero the Acrobat 2 is the sequel to Aero the Acrobat. This game abandons the quest-based gameplay of the first game and instead goes for straight platformer levels. They also added a few new moves to Aero's arsenal.
According to the story, after Aero defeated Ektor the evil industrialist clown in the previous game, he decides to wander around Ektor's evil museum. Meanwhile Zero the Kamikaze squirrel rescues Ektor using his flying machine. While wandering the museum, Aero happens across a strange portal, which pulls him toward a far away past. Turns out the portal was a trap set by Ektor.
Each encode, as well as the movie file itself, contains the author's commentary in the form of soft subtitles.
Published on 8/9/2018
See full publication history
Game:
Aero the Acro-Bat 2
Genres:
Platform

Emulator Version:
Bizhawk 2.2.2
Webmasters, please don't link directly to the files. Link to this page or the front page instead.
Republication of movies from this site is only allowed under the following conditions:
Do not label them with speculations. If unsure, ask the site staff for details.