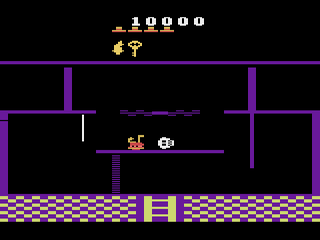 Watch Download (.bk2)
Author notes Discuss
4.74 / 10 Votes: 5
You play as a treasure hunter named Panama Joe, whose goal is to find an ancient treasure hidden by Aztec warrior deep inside catacombs. But beware, the catacombs are a large maze inhabited by monsters. Bouncing and rolling skulls, dancing spiders, disappearing and re-appearing chains and tons of fire await you. You'll have to find many keys and unlock doors in order to reach your goal. Panama Joe can jump and climb ladders, but doesn't have much to offer in terms of combat. That's why the monsters in the game should be avoided: a collision with an enemy leads to a premature death. He will also find amulets which make him invulnerable for a short time. Except for the Master System version, they are activated directly when picked up.
Watch as DrD2k9 goes through this port's three levels gathering all the items in record time.
Published on 7/4/2019 12:00 AM
See full publication history
Game:
Montezuma's Revenge
Genres:
Platformer