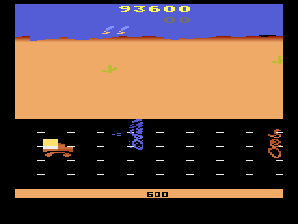 Watch Download (.bk2)
Author notes Discuss
3.72 / 10 Votes: 4
Road Runner was released for the Atari 2600 in 1989, making it one of the last games officially released by Atari for the Atari 2600. The game was a port of an arcade game of the same name, which was also ported to several other consoles like the Commodore 64.
You play as the Road Runner, and you spend each level running to the left trying to dodge obstacles and avoid Wile E. Coyote. The road is littered with landmines and speeding trucks, which will kill the road runner on contact. They can also kill Wile E., but he respawns again after a few seconds. Wile. E. also has guns set up at certain portions of the road, roller skates, and a rocket ship which he can use to try to grab the road runner.
Published on 7/24/2019 12:00 AM
See full publication history
Game:
Road Runner
Genres:
Racing