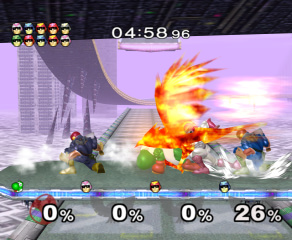 Watch Download (.dtm)
Author notes Discuss
8.86 / 10 Votes: 8
Nintendo's Super Smash Bros. fighting game series is rather different from your typical fighting game. Instead of wearing your opponent's health down to 0, you must knock him or her out of the battlefield. Damage counts upwards, with knockback from attacks that hit you becoming more severe as your damage increases. Fighting controls are also simplified, making it very easy for even your non-gaming friends to pick up and play.
Super Smash Bros. Melee offers fighters from the wealth of Nintendo characters like Mario, Bowser, different Pokémon, Link, and Kirby. They can either fight through the single-player modes like Classic, Adventure, and Event Mode, or they battle it out against other characters in a four-player frenzy.
Additional characters and stages are unlocked as hidden objectives are met, and coins rewarded for playing in all modes can be spent on a capsule toy machine. The toys in the machine represent games from Nintendo's entire video game history, and each can be viewed in 3D with a brief description.
In this TAS, Noxxa plays through the game's Classic Mode on the hardest difficulty, aiming to defeat every opponent in the most entertaining way possible. This often leads to some surprising solutions.
Note: The encodes also feature playing through the credits sequence as well as the "Challenger Approaching" fight against Jigglypuff.
Published on 5/15/2020 12:00 AM
See full publication history
Game:
Super Smash Bros. Melee
Genres:
Fighting
Platformer

Emulator Version:
Dolphin 5.0-10707
Webmasters, please don't link directly to the files. Link to this page or the front page instead.
Republication of movies from this site is only allowed under the following conditions:
Do not label them with speculations. If unsure, ask the site staff for details.