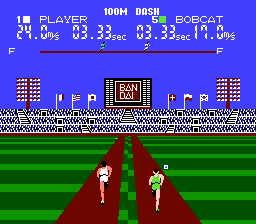 Watch Download (.bk2)
Author notes Discuss
4.82 / 10 Votes: 5
Stadium Events, later re-released as World Class Track Meet, is a track and field game for up to six players requiring the Power Pad. Only a maximum of two players can play together on the pad at the same time. There are four events: 100m dash, long jump, 110m hurdles and triple jump. There's also a tournament mode, where one player competes against a progressively faster opponent in 100m dash and 110m hurdles as well as an olympics mode, where one player competes in all four events in order to get a high score.
link_7777 completes the game's Tournament mode in record time.
Published on 6/7/2020
See full publication history
Game:
Stadium Events
Genres:
Sport

Emulator Version:
Bizhawk 2.4
Webmasters, please don't link directly to the files. Link to this page or the front page instead.
Republication of movies from this site is only allowed under the following conditions:
Do not label them with speculations. If unsure, ask the site staff for details.