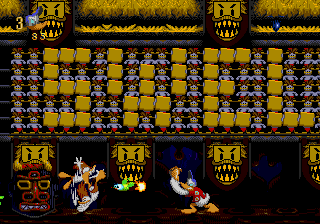 Watch Download (.bk2)
Author notes Discuss
8.85 / 10 Votes: 6
Donald in Maui Mallard is one of Disney Interactive's earlier works, released in 1995 for the Sega Genesis only in Europe and Brazil, in which Disney's Donald Duck takes the starring role. As the detective Maui Mallard, he's on the trail of a long lost Idol, which has recently vanished. Early on, Maui can also switch between his normal self and Ninja Maui, and with all the creepy voodoo enemies he'll encounter throughout his adventure, he's going to need all the help he can get.
SBDWolf completes the game in record time.
Published on 12/20/2020
See full publication history
Game:
Donald in Maui Mallard
Genres:
Action
Platform

Emulator Version:
Bizhawk 2.5.2
Webmasters, please don't link directly to the files. Link to this page or the front page instead.
Republication of movies from this site is only allowed under the following conditions:
Do not label them with speculations. If unsure, ask the site staff for details.