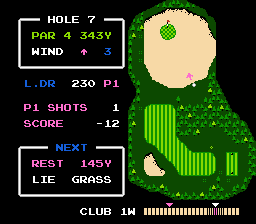 Watch Download (.bk2)
Author notes Discuss
5.19 / 10 Votes: 4.5
Galf is a homebrew NES title from 2017. It originated as a mini-game featured in Golf Story for Nintendo Switch, where the player can play a retro style golf game. A limited release of Galf for NES was released by Limited Run Games, around the same time Golf Story had a physical release.
The game has 9 holes in total, with one of those holes being exclusive to the NES version. The Gameplay is similar to NES Golf with the only different being no view of the golfer themself.
Watch as Wipeoutjack7 soars through each course in record time!
You can watch this run being played back on a console.
Published on 5/2/2021
See full publication history
Game:
Galf
Genres:
Sport
Unofficial game

Emulator Version:
BizHawk-2.5.2
Webmasters, please don't link directly to the files. Link to this page or the front page instead.
Republication of movies from this site is only allowed under the following conditions:
Do not label them with speculations. If unsure, ask the site staff for details.