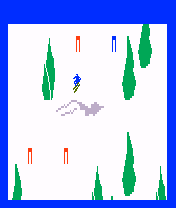 Watch Download (.bk2)
Author notes Discuss
3.11 / 10 Votes: 3.5
U.S. Ski Team Skiing, later re-released as Skiing, is an early sports game that features both downhill and slalom courses on which up to 6 players can compete. The goal of the game is simple: reach the end of the chosen course as fast as possible. Each player's fastest time is chosen from their best performance over three heats.
In the first heat, Winslinator skis through the Downhill course in the fastest in-game time. He follows that up by beating the second and third heats in the fastest real time.
Published on 7/19/2021
See full publication history
Game:
U.S. Ski Team Skiing
Genres:
Sport

Emulator Version:
BizHawk 2.6.1
Webmasters, please don't link directly to the files. Link to this page or the front page instead.
Republication of movies from this site is only allowed under the following conditions:
Do not label them with speculations. If unsure, ask the site staff for details.