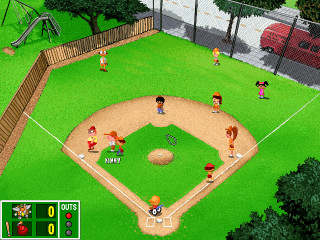 Watch Download (.ltm)
Author notes Discuss
3.99 / 10 Votes: 5
Backyard Baseball is one of the best and most well known kids sports games, being the first game in the Humongous Sports franchise. In this first installment in the Backyard Sports series, the player's goal is to assemble a team of backyard kids and take them all the way to the championship - in this instance, the Ultra Grand Championship of the Universe. While not carrying an official Major League Baseball license, the game does contain 30 kids to assemble a custom team, as well as 10 fields for them to play in. The team's name, colors, and mascot can be defined, as well as its batting order and field positions.
TiKevin83 completes a 6-inning pick-up game in record time.
Published on 7/31/2021
See full publication history
Game:
Backyard Baseball
Genres:
Sport

Emulator Version:
libTAS 1.4.2
Webmasters, please don't link directly to the files. Link to this page or the front page instead.
Republication of movies from this site is only allowed under the following conditions:
Do not label them with speculations. If unsure, ask the site staff for details.