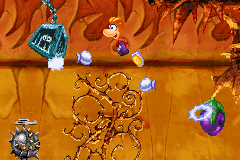 Watch on YouTube
Author notes Discuss
6.73 / 10
Rayman 3 is the 3rd game of the Rayman series. It was originally developed to be the GBA version of Rayman 2, which is why the plot mostly centers around Rayman 2's plot. Globox swallows a Dark Lum, so Rayman goes out to find a cure. However, Admiral Razorbeard attempts to get the Dark Lum out of Globox to make himself more powerful. Rayman must get a cure for Globox while also stopping Admiral Razorbeard's plans.
NinjaCocktail completes the game in record time.
Published on 2/27/2022 12:00 AM
See full publication history
Game:
Rayman 3
Genres:
Action
Platformer

Emulator Replay:
BizHawk 2.6.2
Download (.bk2)
Webmasters, please don't link directly to the files. Link to this page or the front page instead.
Republication of movies from this site is only allowed under the following conditions:
Do not label them with speculations. If unsure, ask the site staff for details.