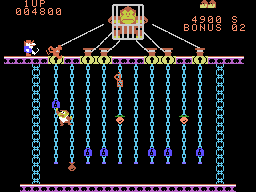 Watch on YouTube
Author notes Discuss
4 / 10
Donkey Kong Jr. is the sequel to Donkey Kong, where the forgotten titular character has to rescue his father Donkey Kong from Jumpman/Mario. It has received ports to many video game consoles, and the ColecoVision is no exception.
Unlike most other ports, the ColecoVision port only has three unique levels instead of four and they are out of order. What would be the fourth level in the NES version is actually the second level here, and after completing it, you repeat the first level again before getting to what would usually be the second level in the NES version. EZGames69 plays as much of the game has to offer in one playthrough as fast as possible in this run.
Published 13 days ago
See full publication history
Game:
Donkey Kong Jr.
Genres:
Platformer