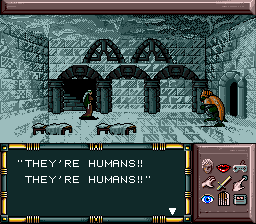 Watch on YouTube
Author notes Discuss
6.25 / 10
Drakkhen is a role-playing game that was originally developed for the Amiga and the Atari ST by Infogrames. An innovative game at the time, it featured an open world that can be explored from a 3D perspective. During the process of being developed for the SNES by Kemco, the story was heavily altered by mistake due to a botched translation job. The original story involves four people who got shipwrecked on the island ruled by the Drakkhen, a race of lizard people that threaten to take over the world. In order to take back the island and save humanity, the four heroes must find the nine gem tears in order to summon the Dragon God that will help them.
In this run, ShesChardcore takes a carefully planned route that, along with a heaping amount of RNG manipulation, minimizes enemy encounters and completes the game as fast as possible. To minimize lag, two of the four player characters are killed off by monsters. For more details, you can read the author's notes here.
Published 16 days ago
See full publication history
Game:
Drakkhen
Genres:
RPG