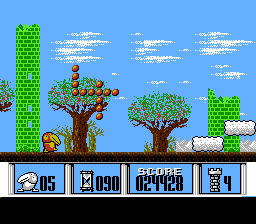 Watch on YouTube
Author notes Discuss
5.73 / 10
Published on 11/23/2022
Castelian is a puzzle platformer in which the basic goal is to ascend towers from the base to the apex. Poro, your frog-like character, is tasked with demolishing these towers by planting a bomb at each tower's top after finding the right route up the tower.
The game was also released on other systems as Nebulus, Kyoro-chan Land, Subline, and Tower Toppler. Nebulus is the original name of the game when it was first developed for the Commodore 64 and ZX Spectrum. Kyoro-chan Land is a licensed reskin starring Kyoro-chan, a mascot for a Japanese chocolate brand named ChocoBall, with Kyoro-chan replacing Poro and ChocoBalls replacing jewels.
ktwo uses the Japanese version of the game as with his previous run and improves on it by around 42 seconds thanks to the use of alternate exits found on various levels.
Obsoletes:
NES Castelian by ktwo in 13:58.29

Emulator Replay:
BizHawk 2.8.0
Download (.bk2)
Webmasters, please don't link directly to the files. Link to this page or the front page instead.
Republication of movies from this site is only allowed under the following conditions:
Do not label them with speculations. If unsure, ask the site staff for details.