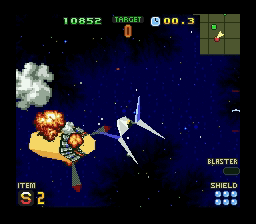 Watch
Star Fox 2 is the sequel to the original Star Fox, although the game was completed, it was cancelled due to the release of the upcoming N64 console. It would later be officially released in 2017 on the SNES classic mini console, and made available on the SNES online library for Nintendo Switch.
YtterbiJum chooses to complete the run with Miyu, his decision based on her superior ship speed and shortest charge shot time.
Note: This run was made long before the game had any official release, and used a prototype rom with a patch that translates and improves the game. As it is a highly extensive modification, it is classified as a hack. See submission for details.
Also, just like with it's predecessor, the game runs faster than it should due to emulation inaccuracies.
The baseline tab shows the default movie beating the game as fast as possible without any special conditions.