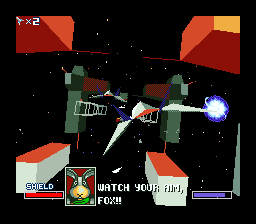 Watch Download (.smv)
Author notes Discuss
7.02 / 10 Votes: 40
One of those hard-to-emulate games because of the hardware assistance provided on the actual cartridge, Star Fox is a well-known 3D shooter. Avoiding obstacles can be tricky on the digital directional pad, so some of the stunts seen are impressive to anyone who knows how hard this game can be.
Emulation of this game is not correct. Lag present on the SNES is not represented in this run. Expect the speed to be higher than actually seen on a real console. For this reason, the audio track lags severely behind the rest of the run. As a result, some of the bosses can be defeated before the boss music begins.
Published on 3/5/2007 12:00 AM
See full publication history
Game:
Star Fox
Genres:
Shooter