Fighter's Destiny is what I can only describe as "basically N64 Tekken".
<Spikestuff> No it isn't
<Spikestuff> and you know it.

Hi, welcome to Fighter's Destiny. I'm Samsara, AKA the only person in history who's ever heard of this game. Fighter's Destiny is a sort-of innovative kind-of fighting game that doesn't use a typical round system. Rounds are determined by the number of "points" you get from finishing off your opponent in various ways. The default number of points is 7.
If you knock your opponent off the ring, you get 1 point. If you throw your opponent to the ground, you get 2 points. If you knock down your opponent, you get 3 points. If you knock down your opponent with a counterattack, you get 3 points. If you beat your opponent down and then finish them off with a Special attack, you get 4 points. Finally, if you and your opponent suck too much to do the aforementioned 5 things, the judges award 1 point to whoever did more damage or something. Of course, all of these values can be changed in the Rule Config option. Even the size of the arena can be changed. Lots of configurability! However, all we're concerned about is setting the number of points needed to 1. Why 1? Because it's faster than 2.
I guess I have to explain the full game here, don't I? Ain't none of y'all gonna know the first damn thing 'bout it.
Apart from judging, every single method of getting points has some sort of counter to it:
But this is a speed-oriented fighting game run, so which one's the fastest? Turns out that the fastest option is... Throws!
Well, kind of.
Four characters in the game (Ryuji, Meiling, Leon, and Valerie) have a hilariously abusable move that the game calls a "Body Attack Throw", which really doesn't make any sense but what are ya gonna do about it? It works kinda like a parry attack from a better fighting game, where you have to input it at the right time to have an effect. And boy, what an effect it has.
If you successfully use the Body Attack Throw, then you catch the opponent in a completely unescapable throw move. Basically, it's a free 2 points for you if you manage to do it. The problems with doing it in realtime are the timing (it's nearly frame-precise) and the limited number of moves it can counter. Namely, it can only counter punches, and good luck trying to consistently get the AI to punch you. Yes, I know, it's a fighting game, punches are supposed to happen, but it's not always a guarantee. There's more to it, however: Each of these 4 characters has two different Body Attack Throws based on whether the opponent punches with their left hand or right hand. This comes into play precisely once in the run. More on that later.
So Ryuji is chosen because his BAT that counters a right-handed punch is extremely fast. It's either tied for the fastest, or it's a tiny bit slower than Valerie's left-handed punch BAT. Since right-handed punches are both faster and more common, this makes him the best choice for the run.
Last two things: Much like the Tekken repeated suicide runs, this run has a lot of pausing in it to manipulate enemy attacks. Also, the in-game timer is super wonky and doesn't increment by the same exact amount in each fight. You'll notice values within .004 of each other, and they're functionally all the same time. It's just weird, yo. That's it. Okay. Bye.

Since most of the stages are just "pause until the AI decides to throw a right-handed punch", I'll talk about some of the quirks of each character/stage in this section.

Gotta admit, Leon ended up being my favorite character when playing as a kid. Leon tends to start most matches with a kick to the stomach, but obviously he can be manipulated out of it. He's one of the BAT characters, but both of his counters are pretty slow. His faster one is the same armbar move that Ryuji has. If you're following along, you'll see that armbar very shortly!
Leon does not return for the sequel.

Ninja is the one character in the entire game who does not have a right-handed punch. He doesn't have any BAT-counterable moves that result in the faster throwdown, so I'm forced to resort to the 3/10 of a second slower armbar throw. Ninja does return for the sequel. His name is also 100% original.

Bob exists. He does not return for the sequel.

Like Bob, Tomahawk also exists. He would probably offend someone nowadays if anyone aside from me knew that this game existed. He does not return for the sequel.

Valerie is the second fastest character for a TAS, and during my initial testing phase I had actually determined her to be the fastest. One of her Counter moves is ridiculously quick, the fastest in the game actually, and she also has a quick Knockdown and fast throws. She's also a BAT character, which would have made her perfect if more opponents had left-handed punches. She's faster on Ninja for obvious reasons, but most characters lack a quick left-handed punch, making her sadly slower in the end.
Oh, and she does not return for the sequel.

Abdul does not punch. He is a master of the forbidden art of four-fingered poking and usage of the word "Hell". Thankfully, his limp-wristed poking counts as a punch move. He ends up being the fastest fight in the run, as he has a tiny bit more range than the others and thus hits into the BAT earlier.
He returns for the sequel. Hooray!

The third of four BAT characters we're fighting, she looks to be the "speedy" character that I usually play in fighting games, except both of her BAT counters are slow so she gets passed over. Except for the sequel, because she returns for it. 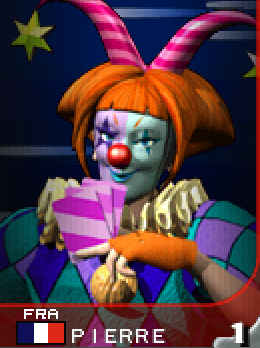 Mirror match! Ryuji's the poster boy of the game, the default character, the Mario to the Fighter's Destiny duology. Except he doesn't return for the sequel. Ha ha!

The secret character boss-type that ends most, if not all, fighting games of this caliber. That's about it. They don't usually return for sequels, either, and Boro's no exception. I think.

So this wasn't the hardest run in the world to do, though it required several re-runs with different characters and different strategies. There were beautiful moments where opponents started with an immediate right-handed punch, and horrible moments where they just would not cooperate under any circumstances, but overall everything went fairly well.
I haven't had a Vaulted run in a while, so that's nice too I guess.

Samsara: Finally, my first Spiking. File replaced with a 10 frame shorter file.
Samsara: If another Judge could set this to Delayed for me, that would be much appreciated. Spikestuff and I are investigating improvements.
Noxxa: Judging.
Noxxa: The run appears to be optimal enough. Accepting for the Vault.
feos: Pub.
Noxxa: As it turns out, this run is bested.
Last Edited by admin@tasvideos.org on 1/1/2022 6:14:14 PM
Page History Latest diff List Referrers