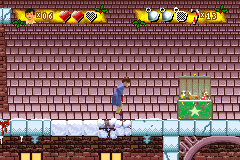 Watch on YouTube
Author notes Discuss
0 / 10
Published on 1/18/2023
The Polar Express is a video game for the Game Boy Advance that is based on the movie of the same name. As with many licensed games at the time, it loosely follows the story of the movie, but with a good amount of liberties taken to make it more suitable for a platformer. Witness as a boy boards a train, gets himself into some sticky situations in the North Pole that probably never happened in the movie, and possibly meets Santa Claus?
Cadit improves on their previous run by 82.06 seconds by making the zeppelin in the final level go faster by holding down the Right button, which was overlooked in the previous run.
The YouTube encode has author's commentary in the form of captions.
Obsoletes:
GBA The Polar Express by Cadit in 35:36.22