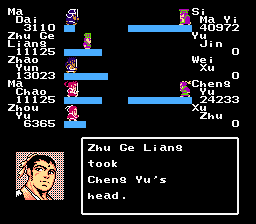 Watch Download (.fcm)
Author notes Discuss
4.77 / 10 Votes: 18.5
Select comments from the author:
Destiny of an Emperor was Capcom’s first RPG, released in 1989―90, and is based on Romance of the Three Kingdoms.
The battling style of this game can be described like Final Fantasy meets Pokémon; your team of warriors versus the opposing team of warriors, and any opponents freed from their posts can be later picked up in the wilds and converted to your side!»»
We recommend reading the rest of the author’s comments; it helps understanding the movie better.
In Bisqwit's opinion, the soundtrack of this game has a lot in common with Duck Tales.
Published on 7/4/2006
See full publication history
Game:
Destiny of an Emperor
Genres:
RPG