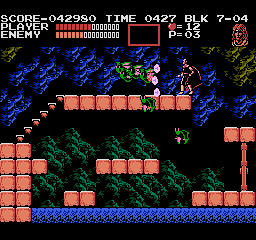 Watch Download (.fmv)
Author notes Discuss
6.93 / 10 Votes: 19
This is the story of Dracula's curse from the times before the first Castlevania game.
The original name of the game is 悪魔城伝説 (Akumajou Densetsu, meaning "Legend of the Demon Castle").
Technically, this game has a really high quality soundtrack - mostly because it uses a VRC6 chip that the Nintendo of America considered too expensive to include in the game cart.
That's why the movie was made for the Japanese version instead of the USA version.
(No, it still isn't SNES quality yet - don't be disappointed.)
This movie is interesting, because the game is complex and difficult and the soundtrack is good.
Published on 4/6/2004 12:00 AM
See full publication history
Game:
Castlevania III: Dracula's Curse
Genres:
Action
Platformer