(Link to video)
Goals:
IMPORTANT: This TAS does not take advantage of lag clipping, a major glitch that would save several minutes off of this time, because there is no emulator that can faithfully recreate this glitch. While this time is several minutes ahead of the fastest real time speedrun, there are a few points where I uncontrollably lose time to RTA (examples being the levels Final Outpost, Watch Your Step, and Breakdown.) Ultimately, it is up to a judge to decide whether this invalidates the run from being publishable.
General Information:
Doom 64 is a spiritual successor to Doom 2 on the Nintendo 64, made by Midway Games and published by id Software. It features 32 new maps, as well as new graphics and sounds on a modified version of the Doom engine (which is built around the Atari Jaguar port's codebase.) It is also the only Doom game to feature the Unmaker weapon. While monsters such as the archvile and the chaingunner have been removed due to low memory capacity, there are also two new monsters: The Motherdemon and the Nightmare Imp.
This run plays on the hardest difficulty: Watch Me Die, the equivalent of original Doom's Ultra-Violence. A seperate category exists for the lowest difficulty, Be Gentle, but I believe that this category is not different enough, nor entertaining enough in a TAS setting to warrant its own TAS. The only notable differences in Be Gentle are less monsters, slightly different routing in certain maps, and double ammo.
Notable differences between Doom 64 and other Doom games:
This will document everything there is to know that makes Doom 64 different between other Doom games in a speedrun/TAS setting.
Usage of speed modifiers (SR40/SR50)
Doom 64 is not designed to be played on a mouse and keyboard, but the weird octopus-styled Nintendo 64 controller we all love to hate. Unlike most games, however, the further you're pushing up on the control stick, the faster you move forward. The same can be said for backwards movement as well. However, the N64 analog stick has ranges far greater than the physical stick can allow (the normal limit is approximately 90, -90 for both the X and Y axes, where the real limit is 127, -128). As a result the console allows inputs greater than what is supposed to be possible on the analog stick. This allows us to get to speeds far greater than expected. In RTA, this involves abusing the calibration of the controller on startup, or manually calibrating using a set of inputs. Setting the neutral position to 90 forward allows access to inputs beyond the standard range while still using a standard N64 controller. In a TAS, however, this is irrelevant as we have access to the full analog range at all times. Therefore, it is important to categorize this trick differently for TAS. 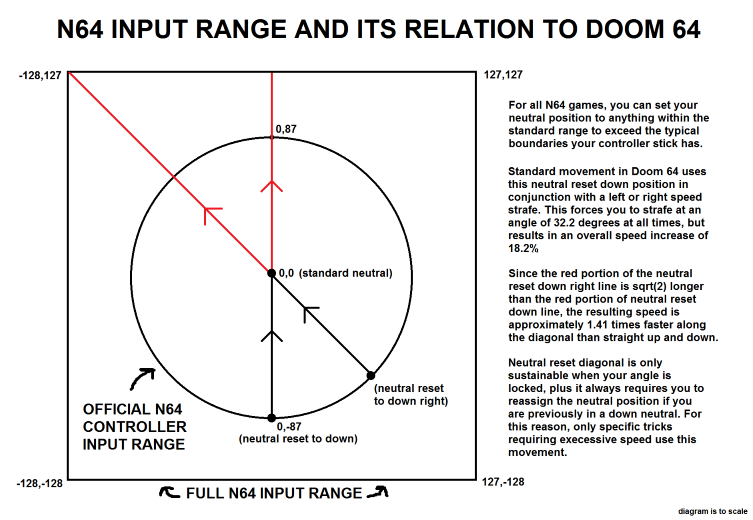 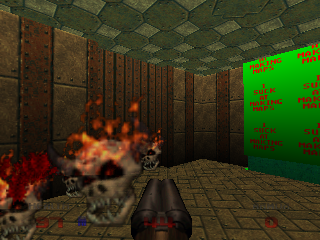