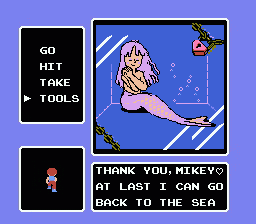 Watch Download (.fmv)
Author notes Discuss
5.14 / 10 Votes: 1.5
This is a historic movie, submitted and obsoleted before the creation of the database-based (and wiki-based) site engine, before July 2004.
It was inserted to the database in a history revival project by Bisqwit in autumn 2006.
Selected comments from the author:
This time I made a time attack @ Goonies 2. I think this is the best route and the fastest possible to play through this complex but yet fun game. I think you have played this so comments about the gameplay are unnecessary. I take hits because it saves time, and I jump through enemies because else I would be pushed backwards. I got 1 hit that wasn´t intentional pretty early in the game but I didn´t noticed it until the .fmv was done so it is there. Doesn´t affect the run but it might look a little bad. Anyways, im not doing this game again just because of that.

Another thing I managed to figure out was the enemy-dropping-rate. Every third enemy you kill in 1 "screen" gives you an item, and that is time based I think.

I also had several problems with the recording cus a penguin changed pattern (!) AFTER the actuall play.

Also, I had to do several re-records after the .fmv-file was done cus it seemed to somehow forget my key-presses. Strange and most annoying but now it´s finished. Finally! So, please enjoy this one too ;)
Published on 5/17/2004
See full publication history
Game:
The Goonies II
Genres:
Platform