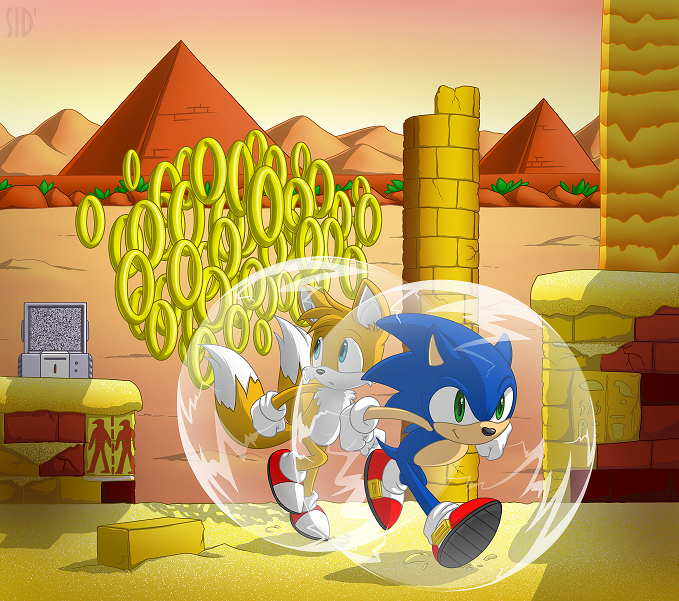 The thing about ring attack TASes is, in a traditional TAS, the idea is to go from beginning to end of a level or game as quickly as possible - but, in a ring attack, it is to go from one ring or set of rings to the next, in such a way that results in the overall level or game completion with the most rings in the shortest time.
Hopefully that gives some perspective on the extraordinary amount of work that ring attack TASes require.
And not to diminish other forms of TASes, which already in their own right require tremendous effort and expertise. It was in fact one such TAS - a traditional Sonic TAS, by SprintGod - which caught my eye in 2012. This was my introduction to TASes as a thing, and it blew my mind and inspired me to get into the TASing scene.
Around that time, new discoveries by the likes of MarzoJr, Nitsuja, Aglar, and others, of game-breaking bugs were resulting in Sonic 3 & Knuckles TASes that were faster and more impressive than ever before. However, there was a growing concensus within the community that such runs, for all their glory, deprived the viewer of the kind of intensive gameplay that makes TASes so attractive in the first place - for which Sonic games of old are ideal, by their fast-paced nature.
Yet, there seemed to be no solution to this dilemma given TASvideos' rightfully strict guidelines governing submissions. And yet again, in spite of this, in 2013 I began work on my own personal vision of what that solution could look like. And hence in 2014 I submitted my Knuckles ring attack TAS of S3K. It was well-received, luckily, and I said then that I hoped that one day a TAS just exactly like this one might eventually emerge.
And now it has.
And it's all thanks to the enterprising Evil_3D, who founded the project, and his inventive co-author Kaan55, who joined some time later, after offering several new strategies to get even more rings; whereas my own participation was primarily planning-related.
I would like to think that my TAS had the same impact on Evil_3D and Kaan55 as SprintGod's had on me. It was a pleasure working with them and getting to know them, albeit in the limited capacity that I did.
And I give them credit for staying true to my original vision of what a ring attack TAS could, and I daresay, should, be. (Could or should be, at least, for now... I can't deny that it would be fun to see Super or Hyper characters zooming around, collecting rings someday, now that this current milestone has been reached.)
I hope that you the viewer, find as much enjoyment as I do in watching this run, and as I and others on the forums did, in watching its development.

What rings didn't we get?

How long did this take to make?

Why the movie starts from a savestate? 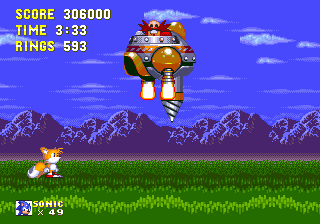 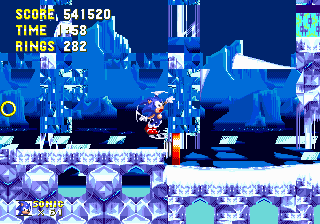 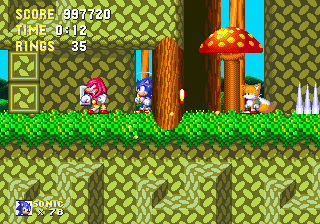 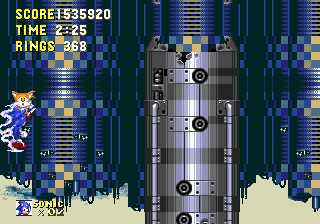 Frame 1200/0:00'00 : The level starts with generating Tails and carrying Sonic when I still do not have control, and I keep Knuckles on the screen as long as possible to prevent the in-game time from starting earlier.
Frame 1960/0:04'00 : You can see that the monitors screens are glitched, but here I collected a ring monitor and speedshoes, the speedshoes are useful to travel the level more faster until the first giant ring.
Frame 2480/0:12'40 : Tails grab 3 rings off screen, at frame 2560/0:14'00 : you can see him grabbing 3 floating ring on the left side. Frame 8995/0:02'36 : By jumping at the right spot Tails is able to clip through the ground using the breakable rock. This allows him to go into Knuckles' area to grab some rings. This was also done in a few more areas.
Frame 9088/0:04'09 : For some reason the Act transition raises the death boundary a little which prevents Tails from being able to grab the rings in Knuckles' area. I have to go past a certain point to lower it back down. I purposefully get stopped as soon as I can in order to get sent back quickly. 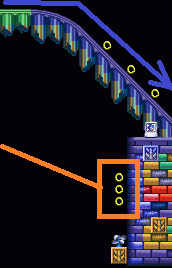 Frame 27405/0:33'00 to Frame 27646/0:37'00 : This section requires a very tight coordination between both characters, the image below is pretty self explanatory about what happen here 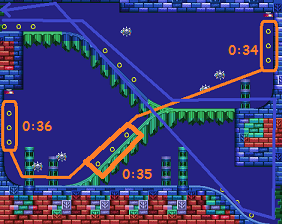 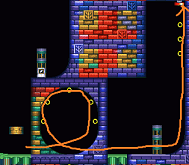 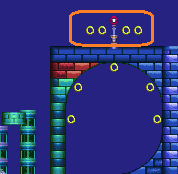 Frame 34046/2:21'10 : The boss received perfect frame hits with bubble shield bounces meanwhile Tails carries Sonic off-screen, you can appreciate this watching the camhack/Tails encode
Frame 34846/end level : This bubble bounce is for delay the score table a bit to get a perfect objects sync on HCZ 2, without this trick we'll lost an unnecessary amount of in-game time
...In progress...

Submission text is still on development, be patient.

Otherwise we'll crush you with all the rings collected in the run
feos: Let's get crushed with the rings and judge this.
feos: Setting to delayed as we hope that the atlas workflow is done first, so everyone could enjoy the hell out of this movie when it's published.
feos: We're back on track.
feos: The ring has been attacked, the game+ has been newed, the submission text has been in development, and I have watched both the atlas and the Tails camhack encodes to understand what's going on. The movie is indeed remarkable, and presence of Tails makes it rather crazy in some places, also the whole thing quite boldly stands out from existing runs... of the whole series I should say. The audience fully agreed, accepting to Moons, will watch the rating regarding starring.
Dacicus: Processing...
Last Edited by admin@tasvideos.org on 1/1/2022 6:13 PM
Page History Latest diff