This Portal port (while not a very portal populated Portal port) is an unofficial fan-made Portal port in tribute to the more portal-populated popular Portal port known as, well, Portal.
The game can be legally acquired free from the author's website in either NTSC or PAL format. This run uses the NTSC format.
This was released in late 2018. The earliest reference on a specific date I can find was on Dec 2 when this video was uploaded by the game's author.

Temp Encode (Typical C64 load-time not included in this encode.)

As with the more well-known version, you are tasked with getting Chell to the exit of each room while not dying. Use of the portal gun is necessary for some, but not all rooms in the game. Sometimes portals are even pre-provided for you. 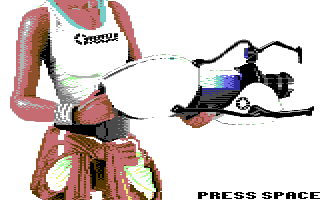 Acceptability of this homebrew game

The developer has multiple videos posted showing some of the developmental stages of the game.
slamo: Nice job on this one, it's very well optimized and finds some unintended solutions. You make a compelling case that this game is notable enough despite being relatively new, and it's obviously a very well made game, so this fits the criteria for a publishable run.
Between the constant action and the great music, I found this very enjoyable to watch. The audience seems to agree. Accepting to Moons.
feos: Pub.
Last Edited by admin@tasvideos.org on 1/1/2022 6:13:49 PM
Page History Latest diff List Referrers