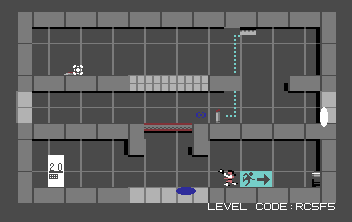 Watch Download (.bk2)
Author notes Discuss
5.34 / 10 Votes: 7.5
Portal for Commodore 64 is a 2018 unofficial "demake" of the original Portal game developed and published in 2007 by Valve Corporation. The "demake" inherits the basic mechanics of the game and adapts them for a simplified 2-dimensional world.
Gameplay still consists primarily of a series of puzzles that must be solved by teleporting the player's character and simple objects using "the Aperture Science Handheld Portal Device", a device that can create inter-spatial portals between two flat planes.
Published on 3/6/2019
See full publication history
Game:
Portal
Genres:
Platform
Puzzle