VVVVVV is a game where you flip gravity around so hard that you accidentally clip into the end area.

This run saves almost 3 minutes over the previous run by clipping into the end area. It also improves the previous movie by using libTAS instead of Hourglass. 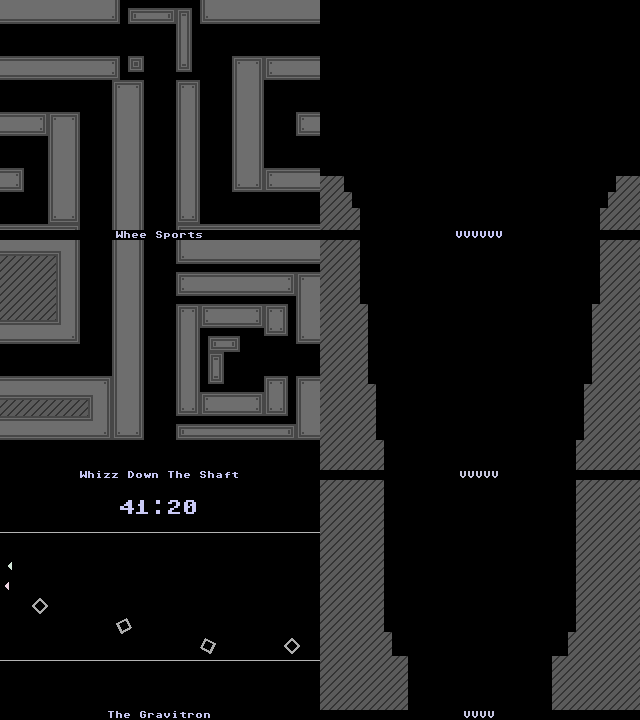 It was known that abusing the R key to trigger a death after completing the Gravitron (the 1 minute bullet hell section) will keep your hitbox in a smaller state while you're able to get to the upper section of the Intermission 2 area. It was also known that you could clip out of bounds into Outer Space by using this smaller hitbox.
But now a new trick was found where using a timed flip near out of bounds will make you flip between two screens, making it possible to move horizontally to a new area.

(full size image)
The top right room is the final room of the game. The room to the left of it is the upper section of Intermission 2, with the Gravitron under it.

The route is very simple. You want to reach Intermission 2 as soon as possible.
Playing the game normally, you will end up with this order: Rescue Violet. Rescue a second crewmate. Rescue a third crewmate. Do Intermission 1. Rescue a fourth crewmate. Do Intermission 2. Rescue the fifth and final crewmate. Do The Final Level.
By abusing the R key to die at the start sequence, we can skip Violet and rescue two other crewmates. You can then rescue Violet which will run a different cutscene, skipping Intermission 1 (and this was previously used to skip Intermission 2 due to the long Gravitron sequence). After rescuing the fourth crewmate, Intermission 2 is started and we can end the game.
Just like in the previous run, a trick called telejumping (dying while teleporting) is used to clip into walls and get to crewmembers faster.
This run was routed by Masterjun, so you will have an easy time improving it. Here is everything you need to know.

6604 9260 10290
slamo: This is obviously an entertaining and well-optimized run, sorry it took a while to judge but there are some things that had to be addressed first.
There is another branch that uses a certain glitch to beat the game very quickly. This glitch requires dying, saving, and quitting with a text box present, and then altering the game state to trigger the ending. It was brought up in the thread that a Gravitron skip was possible that required a save + quit sequence. The author explained that they chose to disallow saving + quitting because it was the least complicated restriction that wouldn't allow a game end glitch, and after some thought, I will agree with this argument. If we allow saving + quitting but restrict people from triggering the ending this way, somebody can just manipulate the game state to trigger an event that's as close as possible to the ending, and this is not really what we want. If we allow saving + quitting but disallow any game state manipulation, this would open up the opportunity for other save + quit glitches that we don't even know about yet. Saving + quitting is a powerful mechanic that is clearly very glitchy and could potentially end the game in less efficient ways than the current "game end glitch" branch, and we want to future-proof against this. Basically, we don't want to create the situation where people are finding specific glitches and tricks purely to circumvent the restrictions we've put in place. For anyone that might argue that any other glitch also has the potential to cause a game ending glitch: there's some truth to this, but currently this is the least complicated restriction we can put in place, and if more game ending glitches are discovered, we will deal with them when the time comes.
There was also the question of a Linux run obsoleting a Windows run. I was unable to find any evidence that there is a difference between these versions. The same glitches and mechanics apply to both runs, so for all intents and purposes, they are the same games. The improvement is obviously due to new tricks that apply to both versions and is not due to platform differences. Also, this run is intended to obsolete the current branchless run; it has the same goal and restrictions as that run, so this run will remain branchless.
Feedback was very good, so I don't see any reason to change the tier. Accepting to Moons as an improvement to the previous run.
fsvgm777: Processing.
Last Edited by Masterjun on 12/3/2020 3:19 AM
Page History Latest diff