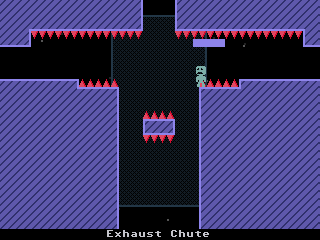 Watch Download (.wtf)
Author notes Discuss
7.89 / 10 Votes: 17
In VVVVVV, the player controls Captain Viridian, who is lost in an alternate dimension, in search of the missing members of the spaceship's crew. Instead of jumping, the player is able to control the direction of gravity, allowing Captain Viridian to flip between the floors and ceilings of the environment. The graphical style of the game is heavily influenced by the Commodore 64.
In this run, Scepheo blazes to the ending in less than 9 minutes (7:55 according to the in-game timer), skips the fearsome Gravitron, and rescues the crew in a fraction of the length of the ship's regulated lunch break. Scepheo also improves Masterjun's previous run by over 4 and a half minutes through a new route and a new glitch that allows the captain to be flung out of a teleporter into a wall. For more information, see the author's comments.
This run avoids using glitches that require pressing the Escape key. There is also a run that uses these glitches to beat the game even faster.
Published on 5/17/2014
Obsoletes:
Windows VVVVVV by Masterjun in 13:30.25