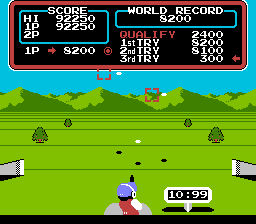 Watch Download (.fmv)
Author notes Discuss
0 / 10 Votes: 0
This is a historic movie, submitted and obsoleted before the creation of the database-based (and wiki-based) site engine, before July 2004.
It was inserted to the database in a history revival project by Bisqwit in autumn 2006.
As for the movie itself... This is Arc's first version of this game. It attempt to achieve the highest score possible at least once per attempt and typically for all 3. On some events it shows off consequences of small mistakes (such as the javelin throw and triple jump).
Published on 3/14/2004
See full publication history
Game:
Track & Field
Genres:
Sport