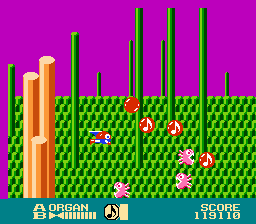 Watch
Otocky was created by Toshio Iwai in 1987 and was only released in Japan for the Famicom Disk System. It is best described as a musical side-scrolling shoot 'em up where the primary weapon is a ball which, when fired in one of eight directions, plays different musical notes on the primary instrument quantized to the beat of the background music.
Needless to say, when such a weapon is put into the hands of a tool-assisted speedrunner, you might just find yourself humming along to the end result.
This run was console verified using micro500's TASLink replay device (with 1 frame per latch poll).
The baseline tab shows the default movie beating the game as fast as possible without any special conditions.