(Link to video)
https://www.youtube.com/watch?v=0tdyU_gW6WE
I did not think I would be back on this game so soon, but after discovering a new speed trick (or a trick that made an existing one more usable), I had to go back and not only make it faster, but also improve the playaround.

So the main reason why I am back on this game so early is due to a new method of getting the speed walking. There's two ways I discovered that work. One method is to start a dash while in the air, and have the dash meter run out before you start moving. The other method is to do a dash in the air, then press the dash button again 2 frames later (or anywhere before you start the next dash). Both methods put Buster into a state where he will halt as soon as he lands on the ground. the way to get the fast dash is to slide for only one frame as soon as you land, and that causes Buster to walk with dash speed without using up any of his dash meter. this state gets canceled out as soon as buster jumps or takes damage. he can also run off a ledge with this without losing speed, but will lose this state once he lands.
This new method eliminates the majority of the jumping movement done in the game, though it's still used in some spots where dash needs to be built up.
Other improvements simply come from me finding out other mistakes I made and having a better understanding of some RNG things, like the final boss.

since we cant damage enemies in our fast walk state, we have to chain some jumps and dashes to kill some rats. I also found out for the 2nd room that if you do the same setup as the fast walk, but hold slide for 2 frames instead of one, you can make buster run for a bit before he eventually slows down. I can use this to grab the gogo statue a bit faster. Since I can get fast walk easily, I dont have to wait for the wolf to drop his key this time.
For Dizzy, nothing really changed other than me somehow getting him to eat the last piece of food earlier, saving a few frames. Also this doesnt save time but I made buster become fast before the cut-scene started because it's funny to see him move that fast.

As usual, I yeet the meat.

Other than the use of fast walking at the beginning, the other changes outside of the Train was using bunny hops to get to Montana Max, and also sliding to get closer to him. That way the distance to travel to the window is shorter.
For the Train, the only major things that have changed is a polishing up on the playaround. The scrolling glitch is the same as before, and I made a video that shows it's possible to take it further, however it's not possible to go any further unless the floor stopped being lava. https://www.youtube.com/watch?v=Bt_JhQSmVHg
I did manage to do some minor time saves, like on the poles that go up and down, I managed to squeeze some frames out of it. also the background graphics are not nearly as broken as the old movie was, but that might have actually helped reduce some lag around the ramp area.
the last bit of change was pressing the x button near Montana to get a bit of distance closer to the edge, saving probably 4-5 frames

This stage also changed route due to the fast walk, although there was some other things I did that were independent of the fast walk. for one, at the end of the 2nd room I managed to push my self slightly forward on the piller to get closer to the loading zone. The other change was in the 3rd room where I realized I could bunny hop up to the platform where the old route went instead of waiting for the hammer to come around. This also resulted in a smoother method around the scales.
I also do the fast walk before seeing Babs, so Buster can walk to the loading zone faster.
As for the boss, I found that even ducking for a frame can manipulate the items he throws, so it's not just position based as I thought it was.

Hey, why are there sports going on? We're supposed to be under quarantine!
I changed the ending of the touchdown to end a bit faster by getting hit right before I slide for the touchdown. The reason why I get hit before actually reaching the endzone is due to the star bonus you get for returning a kickoff for a touchdown, it wastes more time than it saves.

Me: "Hey just because you're a Toon doesnt mean you can defy the laws of physics"
Buster: "haha bunny hop go brrrr"
(I improved the orb collecting)

instead of getting the fast walk off the wall in the ship, I can use it with the new trick I mentioned before.
I changed a bit of the wall climbing section to be slightly faster.
For the final boss, I figured out how to manipulate his movement. depending on which way the base of the lazer is pointing will determine where Duck Vader goes. if it's on the right side, he will go to the right, same for the left. This way I can keep him low to the ground and have him get zapped by the laser every time.

I never expected this movie to ever receive a star, it was such an honor to have my first solo starred movie. This game really allowed for so much entertaining potential not just for speedrunning, but for playarounds as well. I am blown away by the amount of support my old movie received, and I hope this new movie delivered even more smiles to people's faces.
A BIG shoutout to the RTA runners for this game and their support for this TAS, the community is small but they are always welcoming new runners. Also a big THANK YOU to Memory who was so supportive of this game. You are a kind soul.
Suggested Screenshot (frame 18403): 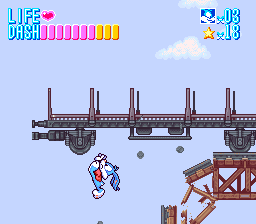 Memory: claiming
Memory: Replacing with 12 frame improvement
Memory: Optimization is good, strong improvement over the publication.
The entertainment value here is extremely good. My few complaints about the previous TAS were rectified and a constant attention to detail is displayed throughout. There is even one segment of playaround where the author manages to execute an extremely clever misdirection to fool the audience as to what was about to happen.
Accepting to Stars as an improvement to [4137]SNES Tiny Toon Adventures: Buster Busts Loose! by EZGames69 in 19:49.99.
fsvgm777: Processing.
Last Edited by EZGames69 on 4/24/2020 11:53:02 PM
Page History Latest diff List Referrers