13 years later, it's finally here! My biggest contribution to this run is simply inspiring xipo to pick it up, though input-wise I contributed the post-boss playarounds, part of the routing improvements in 2-2, and the application of the quick pause glitch in 7-2 (though xipo improved that improvement, and discovered the glitch in the first place). Note that because the published run is 13 years old, it uses 60FPS as the framerate. The actual time of the published run is 09:13.41 using the correct NES framerate.
Normally I'd have a big submission text full of jokes, but I'm honestly so excited to have this run out there that I have to leave it at just this. Also, this entire run was pretty much just xipo, I don't feel right commenting on it.
Working with xipo was an absolute pleasure. Everything went quickly, smoothly, and we ended up with a much larger improvement than I was expecting when I initially took up the run on my own. I can honestly say I've learned a lot from this, I feel like I've improved as a TASer, and I'm honored just being able to have worked on something like this in any fashion.
Thank you to GoddessMaria for being the best girlfriend of all time. You keep me motivated, you make me happy, you've improved my life so much in such a short time, and I can't wait for the amazing future we're going to have together. Love you! <3
And of course, thank you to Scumtron for the published run and for pushing the boundaries of Ninja Gaiden TASing so long ago. It's insane we were only able to get a second's worth of improvement in such a complex game after 13 years. 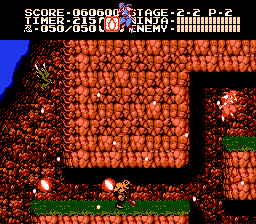 Scumtron is now added as a co-author. While he had no active involvement with the creation of this run, Xipo and I both feel his contributions to previous runs warrant co-authorship. My original omission of his name was a mistake, and I apologize.
ThunderAxe31: Judging.
ThunderAxe31: In cases like these, there is little for me to say. I can only confirm that this is a solid improvement despite saving only 64 against a 13 years old movie.
Also, movie contents are visually similar, if not slightly more entertaining than the current publication. As such, it should inherit the Stars tier.
Accepting for obsoleting [828]NES Ninja Gaiden II: The Dark Sword of Chaos by Scumtron in 09:14.32.
Spikestuff: A Gaiden Time.
Last Edited by Memory on 1/7/2022 9:07 PM
Page History Latest diff