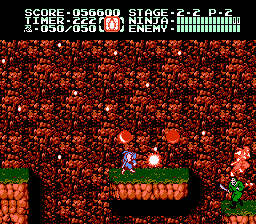 Watch on YouTube
Author notes Discuss
8.35 / 10
Published on 4/9/2007
NINJA外伝2 — The Dark Sword of Chaos, now completed about 4 seconds faster than the previous version by the same author, due to lots of small optimizations throughout every level.
The shadow clones are a unique gameplay element not seen elsewhere in the series, but in this movie they are used mainly to make extremely short work of bosses and entertain the viewer immediately afterwards.
The game has a rich plot with lots of cutscenes. Because of this, the author has also supplied the "story" version of the movie, which exhibits the same gameplay but includes all the cutscenes skipped by pressing start (which sum up to about 3/4 of the entire movie). It can be obtained here.
A good sense of humor is strongly advised to note the irony present in some of the later dialogues between characters.
Obsoletes:
NES Ninja Gaiden II: The Dark Sword of Chaos by Scumtron in 09:18.27