An obsolete video game for a dark passage of history
In the 13th century, the Cathars, clerics who preached about the poverty of Christ and defended life without material aspirations, were treated as heretics by the Catholic Church and expelled out of the Languedoc region in France. One of them, called Jean Raymond, found an old church in which to hide from crusaders, not knowing that beneath its ruins lay buried an ancient evil. - official plot synopsis
l'Abbaye des Morts is a exploration platformer game originally developed by Locomalito and Gryzor87, and released for PC in 2010 with a graphical style emulating a ZX Spectrum game. Since then, various ports have been made by various developers, including an actual ZX Spectrum port (developed by Jerri, 2014), a Mega Drive port (developed by MoonwatcherMD, 2017), and a Commodore 64 port (developed by Double Sided Games, 2019) - the latter two lacking the ZX Spectrum style, but making use of their significantly better hardware.
Following the plot synopsis above, you play as Jean Raymond as he explores through an old church, which unveils its dark secrets the deeper you go, and increasingly higher amounts of creatures, evil stage geometry, and drops of water all come out with the aim to kill him.
The objective of the game is to collect 12 crosses spread throughout the area and bring them all to the altar found deep below the church. There, a terrible fate appears...

Jean can walk, crawl, and jump at a fixed height. That's it.

Jean has a maximum horizontal movement speed of up to 3 units. He accelerates by 1 unit per frame when holding either sideways direction, and decelerates if not holding a horizontal direction. This has a few interesting effects:
With all these effects combined, during waiting moments, running into walls, or other moments when horizontal movement is temporarily put on hold, a lot of different movements are done in order to optimize X subpixels.

When jumping into a ceiling, upwards momentum is also conserved (and subtracted by gravity normally) even as Jean's head is stuck on the ceiling. As a side effect, it's possible to make lower jumps by letting a ceiling soak some of the upwards momentum. This has some utility in various places.

There are various checkpoint statues spread throughout the environment - an important aspect of routing is determining which checkpoints to trigger so they can be deathwarped to later.
Jean is apparently made of nitroglycerin, as the slightest touch of any hostile obstacle sets him ablaze. This includes, among other things, demons, spikes, spiders, worms, and droplets of water. Conveniently, deathwarping is rather quick, so there are nice uses for it.

There are various considerations towards devising a route for this game:

Jumping in specific patterns can save a few lag frames here when the crusaders appear.

Same as previous screen, specifically timed jumps to save some lag frames.

The fastest way to get up the platform is to jump up the first step of the altar. Also, the checkpoint statue is triggered here - it will be used later.

Jumping up the first step of the stairs again, because it is the fastest way to get on the upper platform.

Tower of the Bell

A mildly complicated platform jumping route here to go up to the bell as fast as possible. The ceiling is used for momentum carrying.
Triggering the bell here opens up the door to Catacombs from the altar.

Collecting Cross 1 here, then deathwarp on a spider back to the altar.

Access to the Catacombs is available now, and that is where Jean goes next.

There are a few different directions Jean can go in, and a cross to collect; the cross will be collected later as Jean heads to the right first, as there are some crosses to collect there and the best time to do that is now.

A very precise jump under a spider is done in order to collect Cross 2 here.

Collecting Cross 3 here, and deathwarp on another spider back to the altar again. Jean is now down to his last life, at least for now.

The next place to go to is to the left of the Catacombs, so down Jean goes again.

Collecting Cross 4 here now. One of the skeleton enemies gets in the way, which costs some time and adds some optimization challenges.

Collecting a Heart along the way - this will be used for deathwarping later. Since it's neatly along the way, no time is lost here.

There's an unique homing enemy here. It's hard to maneuver around, so the best way to get around it is to get it stuck on one of the platforms. This way, it can be bypassed without losing too much time.
There's a hidden entrance accessed by crawling on the upper left side of the screen, which also conveniently has another Heart along the way.

By coming from the hidden entrance, it's possible to collect Cross 5 here. A bit of delay is needed here to not get toasted by the beast's fire.
There's a lever here. Triggering this lever will open access to Hangman Tree from the altar. This will be entered later. A very precise jump is used to trigger the lever without actually needing to land on the platform.

The spike floor is fake and can be fallen through (one scroll hints towards this) - this is needed to collect a cross in the next screen.

Collecting Cross 6 here and moving on.

Collecting Cross 7 here and going back.
At this point, all crosses that can be collected before triggering the Wheel of Faith (except for one located at the Wheel of Faith screen itself) have now been collected, so that's where Jean will be going next.

A precise jump is needed to get past one of the fish enemies.

The wheel of Faith

Collect Cross 8, then trigger the Wheel of Faith, which swaps the remaining unobtainable upright cross items with collectable square cross items, then collect Cross 9. Then deathwarp out on a skeleton's arrow.

Now that Jean has access to Hangman Tree (from triggering the lever at Pestilent Beast), and the cross located within is now collectible thanks to triggering the Wheel of Faith, Jean now goes there.

A precise jump is done to go between two of the hangmen, although Jean still need to waits for the next part because of a very inconveniently placed worm enemy.
There's another lever here - triggering it opens up a door to Banquet of Death from Underground river. Also, Cross 10 is collected here.

Going back here on the way to the next area.

This time Jean doesn't need to collect the cross, so Jean takes the lower route now as it's faster.

Triggering the lever in Hangman Tree has opened up the door here.
Also, Jean triggers a checkpoint statue here, for the first time since the first time Jean entered the altar. This will be used shortly.

This is essentially a boss battle screen of sorts. Death is at the top of the screen, guarding a cross, and dropping sickles downwards while moving across the screen in a fixed pattern.
Rather inconveniently, by the time Jean reach the upper platform layer, Death is at an annoying location where it's basically impossible to get past him until he's moved to the right enough. On the two more leftward platforms, Death would hit Jean with a sickle before Jean would be able to jump past him.
After collecting Cross 11, a deathwarp is done on one of Death's sickles.

Jean now deathwarps back here - despite only being one screen away, deathwarping still saves a few seconds here.
There's a door on this screen, which can be entered. It warps Jean over to another door at Pestilent Beast, and can be accessed both ways.

There are two ways to the lower left part of the screen - after optimizing both possibilities, the top route was exactly 1 frame faster. Worth it!

There's an invisible floor here which must be used to reach a lever (there's one scroll that hints to this invisible floor's existence). It opens the door to the next location.

The enemies here were quite annoying to get past and need some quite precise jumps.

This screen is borderline bullet hell - especially the bottom area with the final cross. Cross 12 is collected here with surprisingly little time loss.
The demon enemies are a bit more annoying, just as in the previous screen, but even less room for jumping.

One of the more complex screens in the game, with a lot of moving obstacles to navigate past.
One of the main bottlenecks here is the bottom horizontally flying bat enemy - it's barely not possible to reach the bottom right floor when trying to pass him from the left side. The next best option is passing him from the right side just as he turns around. There's a single pixel gap to get past here without dying or getting stuck on the platform.
Jean has collected all 12 crosses at this point, making it possible to enter the final screen.

Another boss battle screen - the 12 crosses form platforms to use in order to reach a chalice. Meanwhile, Satan fires deadly spheres in a spread pattern which also must be avoided. Various little movement tricks, both horizontal and vertical, were used to time jumps as optimal as possible to navigate the cross platforms and reach the chalice as soon as possible without getting hit.
Once the chalice is obtained, input ends, as the final cutscene and ending plays.
...expected a happy ending? 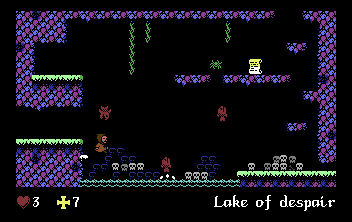 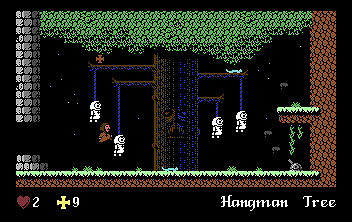 Thanks for watching!
Memory: claiming for judgment
Memory: Optimization looks good.
There's not a lot of exciting speed tech here but people enjoyed the game itself enough to give it a good amount of yes votes and positive feedback. It definitely seems like a decent homebrew.
Accepting to Moons.
Zinfidel: Processing...
Last Edited by Noxxa on 8/14/2021 7:02:04 PM
Page History Latest diff List Referrers