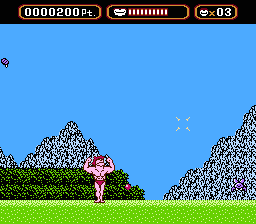 Watch Download (.fcm)
Author notes Discuss
5.46 / 10 Votes: 33
Amagon is an anti-heroic marine who has been sent to explore an island in the South Pacific. You wouldn't know he's a marine, since he doesn't wear a marine uniform, or long pants, or much of anything when he transforms into a giant strong man twice his size. Amagon's goals appear to be to (1) slaughter the majority of the wildlife on the island, (2) cover up the existence of dinosaurs and aliens by massacring them, and (3) flee the scene on a rescue boat.
Tailz's second version, about 40 seconds faster than his first.
Published on 11/2/2006
See full publication history
Game:
Amagon
Genres:
Platform